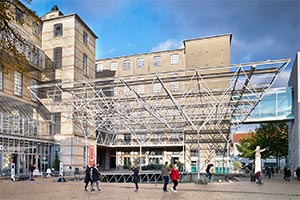 We would never have thought that the quiz question “Which of Vigg’s dogs were used in the Lyric Video on YouTube?” would be difficult to answer (Newsflash #44). Apparently it was. None of the respondents answered the question correctly. We did invite about thirty hardcore fans of Vigg Strubble to participate in an exclusive event nearby a high school in the lovely town of Odense in Denmark.

Vigg played several old songs on request. Songs like Softly, softly, gently, gently; Sadness I do not know anymore; Mrs. Botany’s Boardinghouse; Relating (my hesitation to you) and Crispy. Of course next to acoustic versions of Caught Red Handed, Already Baked in the Cake, Peeing with the Big Dogs and Parrot Knocker, the Sad Days of an Old Funky Mineworker. Vigg also introduced new songs like A Fair & Square Politician (Newsflash #52) and, the most popular song that afternoon, Not a Plastic Toy… (Newsflash #51). Vigg closed this intimate gathering by playing the new arrangement of one of his classic songs It Looks Like Everywhere (Newsflash #53). Next to mingling with the crowd, some refreshments and sandwiches, Vigg also paid his respects to the staff members.

After taking pictures, signing some autographs, and telling several jokes about being on the road again, Vigg Strubble said goodbye to these friendly Danish youngsters. “We’ll meet again!”, shouted Vigg when he was pushed into the car by one of the tour managers. Off he went, first to Germany, and then back to The Netherlands (N.#50/07/2017).