Once again: many thanks for the special acoustic performance! (note webmaster: July 31, 2017: Newsflash #50) We loved all the new songs, of course next to the other songs you’ve played. We also liked the friendly atmosphere of the event. I have made this piece of art, Vigg. Hope to see you soon at another gig! (November 1, 2017) 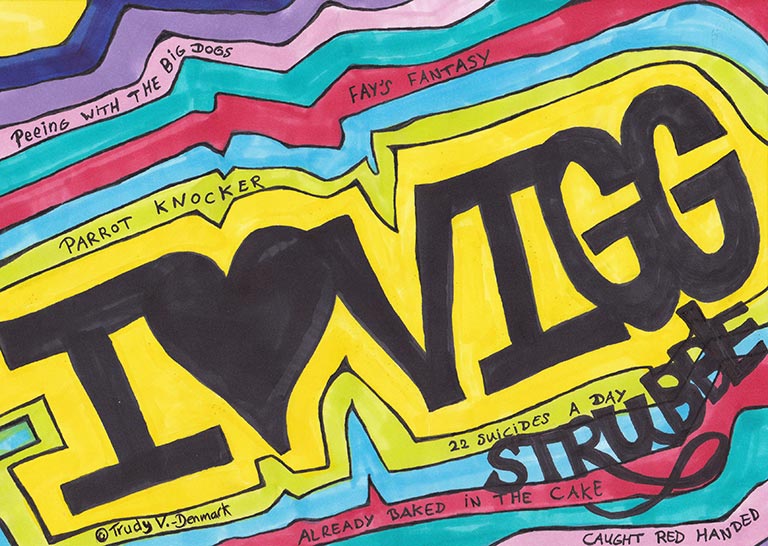 Thank you for your email and for sharing this song and video with us – it is a great song! I have passed it on to the rest of the Team here. Thank you again, Vigg. Please take care. (October 16, 2017)

Thank you! A very catchy song! (October 15, 2017)
(note webmaster: regarding the original song/video about the U.S. President: Newsflash #44)

Thank you for sharing Vigg Strubble’s music with us.
You are more than welcome to post this to our Facebook page for our supporters to see. Best wishes. (October 12, 2017)

Thank you for the moving song and voluntary contribution to the upcoming PTSD Awareness Day 2017. Please don’t hesitate to reach out in the future. Cheers. (June 22, 2017)

Nicely done Vigg!  I posted your song on our ONF FB page and my personal one too. Just curious: What inspired you to write about veteran suicide?
FYI, the popularly known number of 22 is now averaging 20/day and decreasing. Still a long way to go! Thanks for sharing! (June 3, 2017)
(note webmaster: ONF = Operation NEVER Forgotten: Retreats & Awareness for U.S. Veteran Community)

Parrot Knocker rocks, Vigg! I was expecting the re-release of your old song for weeks now, Vigg. This weekend I searched on Spotify. And there it was, just as promised on the short demo video on YouTube: Parrot Knocker “revisited”. I have already played it again, again and again. Not only at home, but also when I’m going to work. Fantastic: so different from the original. I like it. I like it. I like it. See my drawing: especially made for you, Vigg! (November 6, 2016) 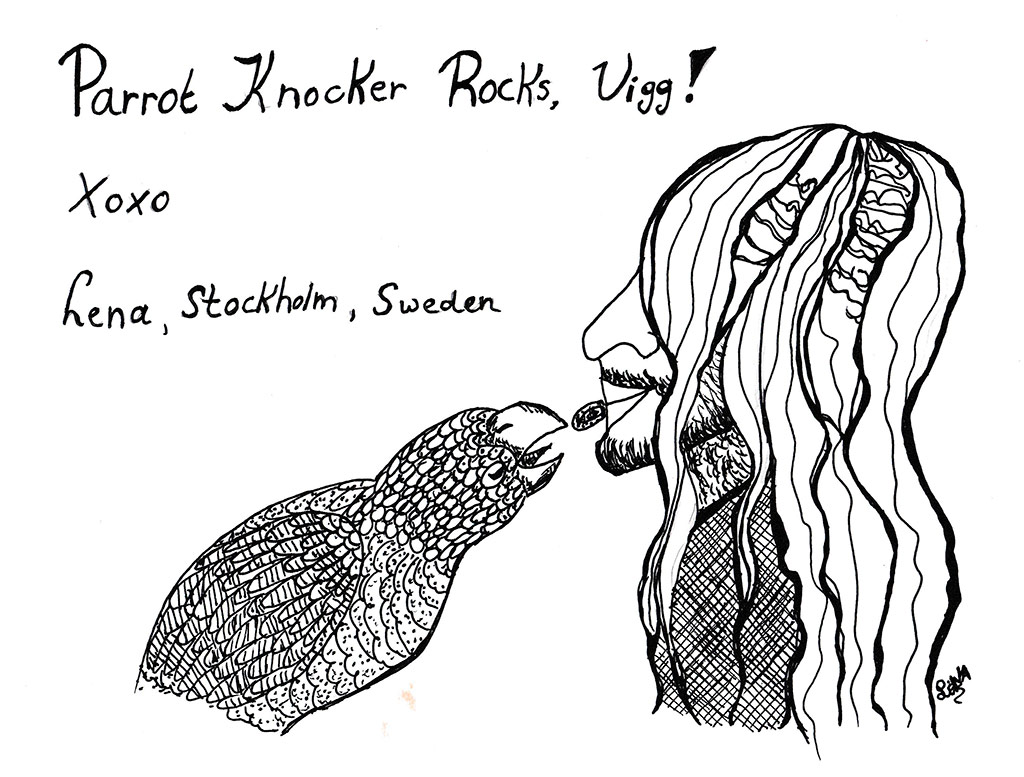 I’m very pleased with Vigg’s new song Peeing with the Big Dogs, together with his new band The Chiwawas. It reminds me of his earlier period in the 80s. I’m still fond of several of his songs: It Looks Like Everywhere, We Have to Keep It Up, Tincan and A Dog’s Life. His view on the real issues in society (even when I was young) are breathtaking. Today I cannot agree more with his sharp comments on, e.g. the American elections. Keep up the good work, Vigg! (August 13, 2016)

Surprised by this song Peeing with the Big Dogs. Never heard of this man before. But I think it’s one of the best lyric videos I have ever seen on YouTube. Must admit: I am a bit of a video freak. But I am beginning to like his music (September 30, 2016)

When I have to work hard I always listen to his songs Softly, Softly, Gently, Gently and Sadness I Do Not Know Anymore. These songs of the 90s put me back in time. My wife loved these songs of Vigg (performed, as I recall, with his stageband The Victorians, or maybe this was later on, now I am confused, because… never mind) (May 1, 2014)

As long as we have lived here I never wanted to visit the concerts: we heard the noise loud and clear in our backyard. Until Glastonbury 2004, when it was said that Vigg Strubble would come to perform acoustically. He never did. The bastard! Later on, I understand that, after his divorce in 1995, he never accepted any gig, anywhere, anymore. Bloody shame. But I like his latest work Peeing with the Big Dogs (April 23, 2016)

One of my favourites is Mrs. Botany’s Boardinghouse. In its own, it is a kind of short story. Vigg’s music (and singing on this track) made me a huge fan over the years. Just like his song Crispy: funny and cheerful. These songs never disappointed me. I don’t like his new material with his new band The Chiwawas, except Peeing with the Big Dogs. That is Vigg Strubble all over again. Maybe I have to listen more often (June 16, 2016)

My neighbours in my hometown are Dutch. They always turned on Temporary Relief, a beautiful song of Vigg Strubble (date:???). Fascinating lyrics. Attractive melody. You have to listen to it when you are down-and-out. (January 31, 2015)

No one mentioned Vigg’s later work after the millennium. Songs like A Twist of the Wrist and Relating (My Hesitation to You). At that time Vigg Strubble only worked with some top musicians in different studios. Man, that was something! Peeing with the Big Dogs is a promising start of a new period with his new band The Chiwawas. I can’t wait (May 11, 2016)

Get in touch with Vigg Strubble and the Chiwawas: just send an email to info@viggstrubble.com