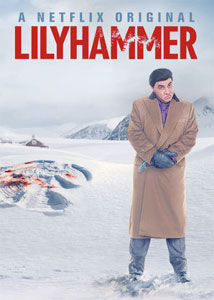 It’s a pity that Season 4 of the Netflix series Lilyhammer has been cancelled.

The hard core fans of Vigg Strubble will not be able to have a glimpse of Vigg as a Norwegian biker, who tries to run over Steven van Zandt in his role of Frank “The Fixer” Tagliano (aka Giovanni “Johnny” Henriksen in the town of Lilyhammer in the series).

As musicians among themselves (Steven is of course also well known as a long time member of Bruce Springsteen’s E Street Band) Vigg has told Steven that he thinks Lilyhammer is a first-rate TV series. Some people say Vigg Strubble doesn’t understand that he isn’t someone like Bruce Springsteen (who played a very funny part in the last Season 3). But musicians tend to stick together, so the idea for a cameo in some sort was born. On the other hand: some insiders (who had a sneak peek at that particular scene) are saying that it isn’t Vigg Strubble at all. It’s a Norwegian athlete with the same hairstyle as Vigg. So a cameo in Netflix’s Lilyhammer Season 4: true or false? (N.#35/11/2015)