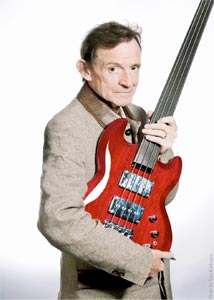 Vigg starts talking: “We grew up with the supreme sound of John Mayall & the Bluesbreakers. In the mid 60s I went with my good old friend Theo (editor’s note: Theo van Oven, still one of the regular drummers of Vigg’s line up) to London. The first important thing at that time was to pay a visit to The Marquee Club. We went to a so-called ‘all nighter’. With several bands. All night long. One of them was John Mayall & the Bluesbreakers. And there he was: a modest man with a large bass guitar playing his guts out! What an energy! What a sensation!”

Vigg gets emotional when he tries to catch that moment of the 60s in the well known Marquee Club. Vigg continues his story: “It was an astonishing experience to see and hear Jack Bruce playing bass guitar.” Vigg went home. From that time on he knew that there was only one musical instrument which was made for him personally: the bass guitar. And he had to study hard, very hard. Because his musical hero Jack Bruce had also studied at the Royal Scottish Academy of Music and Drama (RSAMD).

Vigg resumes: “A couple of years later suddenly my younger brother was mad about Cream. The first major line up with Eric Clapton, Ginger Baker and, of course, Jack Bruce. A lineup that was called ‘a super group’. After Blues Incorporated, John Mayall and the Bluesbreakers, Manfred Mann and so on Jack Bruce became an influential factor in this super formation. Originally Jack really did not want to sing. But I’m pleased he did! The singing in songs like Politician (editor’s note: 1968), Sitting on Top of the World (editor’s note: also 1968), Born Under a Bad Sign (editor’s note: once again 1968) is characteristic for Jack Bruce. Next to Eric Clapton and Ginger Baker this was the very specific sound of Cream.”

Vigg ends his admiration for Jack Bruce with the following well chosen words: “I am glad that Jack Bruce died quietly within the intimate setting of his family. I think it suits very well with his kind personality. Musically spoken he was one the greatest bass guitarists of our time. After the death of this legendary musician on October 25 there aren’t many exceptional bass guitarists left from the early years. Awful.” (N.#29/10/2014)